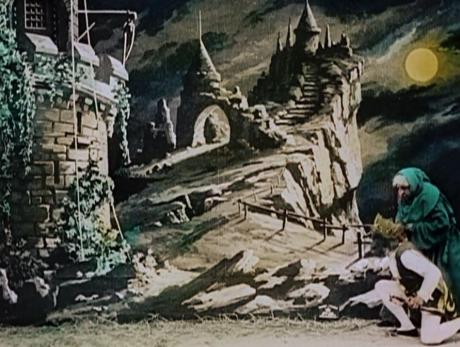 The holidays are a wonderful season for fantasy entertainments, some of them dating from antiquity. Christmas pantomimes, The Nutcracker, The Blue Bird, and other tales—not always directly referencing Christmas or any other holiday, but always evoking the wonder of childhood—have long since become cherished holiday traditions. This December, Flicker Alley is providing us with a ready-made new delicacy to add to that assortment: Méliès: Fairy Tales in Color. Georges Méliès probably needs no introduction for anyone visiting this website; his is one of the most important and best-known names in the world of early cinema. On the other hand, he is sometimes carelessly pigeonholed as a maker of “trick films,” when in fact his cinematic vision and influence go far beyond such a limited label. Flicker Alley has done as much as anyone over the last ten years to bring Méliès’ extraordinary body of work to a wide audience, often working with the dedicated restoration professionals at Lobster Film in Paris. Now the partners have teamed up again with a new selection of his lovely hand-colored films, painstakingly restored in new high-definition scans, and specially packaged as “an ideal opportunity for parents to share the fantastical world of Méliès with their children.”
Not surprisingly, the collection includes what is, hands down, Méliès’ best-known film, Le Voyage dans la Lune (A Trip to the Moon), as well as the arguable runner-up, Voyage à travers l’impossible (The Impossible Voyage). For this column I’m focusing on a film that has received far less attention than either of those landmarks. Le Royaume des fées was released in the U.S. alternately as The Fairyland or The Kingdom of the Fairies. Produced in 1903, by which time Méliès had been making motion pictures for seven years and had produced literally hundreds of short films, this one-reel classic seems to me a marvelous showcase for his vision, imagination, and pioneering technical wizardry.
Drawing on the 19th-century French stage tradition of féeries, this film offers a plot constructed of generic fairy-tale conventions. A prince and princess in a fantastic kingdom are betrothed, but the celebration of their engagement is marred by the appearance of a witch whom the king has neglected to invite to the festivities. Stung by this insult, the witch vows revenge. (Folklore enthusiasts, and Disney fans, will note the similarity to the story of Briar Rose or Sleeping Beauty, which had been recorded by both Charles Perrault and the Brothers Grimm.) At her orders the princess is kidnapped, carried away, and imprisoned in a distant tower. The prince, played by Méliès himself, must undertake an heroic journey and brave a host of dangers to rescue the princess and bring her back.
Of course this story is only a framework for a series of scenes in which Méliès can unleash his visual imagination. The camera tricks he had discovered and refined since the 1890s are well suited to a tale of magic and witchcraft such as this. The witch summons a horde of demon helpers who appear out of thin air; later, when the prince tries to strike at them with a sword, they vanish on contact into puffs of smoke. In one remarkable scene the royal inhabitants of the castle watch in horror from a balcony as the demonic carriage, bearing the princess away, rolls across the sky above them. Immediately afterward, as the prince laments the fate of his beloved, the witch taunts him by causing the entire wall of the room to dissolve away, revealing a vision of the princess borne away to her distant prison. In 1903, of course, the invention of the optical printer was still years in the future, and all these effects were necessarily created in the camera.
On the other hand, Méliès’ own roots were in the theatre, and he doesn’t hesitate to make use of the stage conventions of the féerie. Much of the magic in this film is accomplished by means of trap doors, mechanical devices, and huge, elaborate set-pieces “flown” from the top and sides of the stage. And some scenes freely mix cinematic and stage devices. When the prince’s journey takes him underwater to the court of King Neptune, the scenes are apparently filmed through the glass of an aquarium placed near the camera. As water nymphs, suspended by wires, “swim” through the scene, they’re augmented by real fish swimming in the foreground.
And all of this is enhanced by the beautiful hand-coloring effects that Méliès and some other filmmakers used during these years. The process of applying the color to the release prints, frame by frame, was rigorous and time-consuming, but it lent an enormous measure of charm to films like this one. Budget-conscious exhibitors could obtain Le Royaume, without the coloring, for half-price; and in the U.S., at least, a compromise version was available with coloring only in the vision and underwater scenes. But it’s the full-color version that really captures Méliès’ vision, in this and other films. We’re doubly fortunate that so many of his visions have survived intact, and have now been lovingly restored to view with a healthy dose of 21st-century magic.