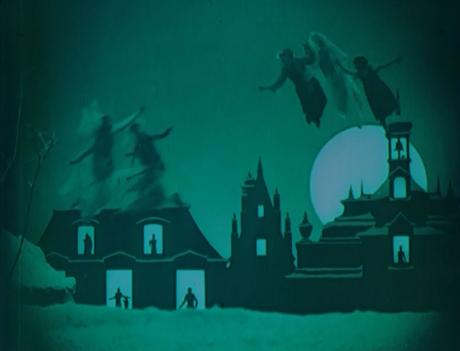 Once again, the arrival of December brings with it a host of familiar “Christmas films” like The Bishop’s Wife and Miracle on 34th Street—along with thoughts of other, less familiar, offbeat films that celebrate the season in their own way. One outstanding example is Maurice Tourneur’s lovely silent production of The Blue Bird. One could hardly ask for a more delectable cinematic treat at this festive time of year.
The Blue Bird is a Christmas subject in the way that The Nutcracker is a Christmas subject: the plot has only a marginal connection with the holiday, but it’s supplemented by charming fantasy elements that evoke a sense of childlike wonder appropriate to the season. In this case, the basis of the story is Maurice Maeterlinck’s 19th-century play about two children who are sent on a fantastic nocturnal quest for the bluebird of happiness, only to find it waiting for them when they return home. Along the way they’re introduced to the humanized “souls” of inanimate everyday objects like Fire, Water, Bread, and Milk, and their journey takes them to such imaginary lands as the Palace of Night and the Kingdom of the Future.
Such an extravagant fantasy was made to order for the talents of Maurice Tourneur. He was the first of the great pictorialist directors, an artist who regarded the motion-picture screen as a giant canvas upon which he could render beautiful, moving images. In 1918 Tourneur was at the height of his powers and his influence in the American film industry, and he was given free rein to transfer Maeterlinck’s fantasy to film. Working with his brilliant longtime art director Ben Carré, Tourneur used camera tricks, miniatures, stagecraft, and the power of two unbounded imaginations to concoct a fantasy of flying spirits, palaces, and mighty sailing ships. Scene after scene of surpassing beauty passes in succession on the screen, challenging even the jaded adult viewer to view these wonders of the imagination with “the artlessness, simplicity and faith which are richest in childhood,” as an opening title has it.
Not that The Blue Bird is a soulless series of tableaux; thanks to the underpinnings of Maeterlinck’s allegory, the dramatic point of the story is never lost. Some of the children’s adventures have a dark and haunting quality. In one poignant episode they visit their deceased grandparents, who exist in the afterlife in a state of perpetual slumber, awakening only when someone on Earth thinks of them. And the quest for the bluebird, frustrated again and again, is tinged with sadness—until the children return home at the end and realize the point of their journey.
As with many pictorialist films, the director and his fellow craftsmen are the real “stars” of The Blue Bird, the onscreen players making less of an impression. There’s nothing wrong with Tula Belle and Robin Macdougall as the two children, nor with the actors playing their parents and other adult companions—but we come away from the film thinking not of their performances, but of the rich visual wonders we’ve just witnessed.
That we can even see The Blue Bird at all is a gift in itself, for the film was very nearly lost. The currently available restoration, complete with original tinting, was produced by George Eastman House from what was apparently the only surviving nitrate print. And, in fact, it was rescued in the nick of time; the original main titles are missing, and many scenes are marred by the telltale signs of beginning nitrate decomposition. But the film enthusiast is encouraged to seek out this gem anyway; these minor blemishes count for little against the ineffable beauty of the fantasy sequences, which survives largely intact. (Those who seek it out on the Kino DVD will be rewarded with an added bonus: the charming, sensitive musical accompaniment of the Mont Alto Motion Picture Orchestra.) In a way, the nitrate damage is almost a good thing: it underscores Tourneur’s fragile fantasy with a reminder of the fragility of film itself, and the importance of preserving classic films like this one.