This is a special department devoted to the great film composer Max Steiner, whom I (and a lot of others!) regard as a particular favorite. Between 1929 and 1964, literally hundreds of films, classics and potboilers alike, were elevated by Steiner’s music—richly varied, sometimes heartbreakingly beautiful, always compelling and evocative. I have a special affection for Steiner’s scores of the 1930s, a decade during which he essentially defined the art of musical scoring for sound films and created some of that medium’s most enduring works.

We’ve all enjoyed Steiner’s music while watching the films; but today, dedicated aficionados have the additional opportunity to hear his music out of context—separated from the films themselves, isolated from dialogue and sound effects. To one who already loves the films and the music, the chance to savor the music by itself is a luxury that enriches both. Several record labels have offered recordings of Steiner scores, but I want to call particular attention to two of those labels, both operated by friends of mine.

BYU Film Music Archives is the brainchild of James D’Arc, the Director of Special Collections at BYU. In his role at the university, Jim presides over a huge Max Steiner collection which includes not only a wealth of written music, but also hundreds of reference acetates—the discs recorded on the sound stage while Steiner was conducting studio orchestras for the film soundtracks. Newly remastered and enhanced with digital noise reduction by audio wizard Ray Faiola, these priceless recordings have been used to create an outstanding series of CDs. They offer us the unparalleled opportunity to hear Steiner’s own original recordings of his music, in their purest form.

Tribute Film Classics offers a golden opportunity of a different kind: new, state-of-the-art digital recordings of classic scores by Steiner and other composers. Tribute consists of John Morgan and William and Anna Stromberg, all trained musicologists and devoted film music enthusiasts. Their process begins with John’s painstaking reconstructions of Steiner’s original arrangements, often working from surviving written materials that are fragmentary at best. Some of his reconstructions have resurrected scores for which no acetates have survived, as well as cues that were composed for a particular film and then not used. The music is then recorded by a full orchestra under the brilliant direction of Bill Stromberg.

Clicking on any of these links will take you to a site where the disc can be ordered. There you’ll see that these same labels have also recorded CDs of later scores, and of scores by other composers. Needless to say, those recordings are highly recommended too. But this is my website, and I’m choosing to highlight the 1930s scores of Max Steiner—in my opinion, the finest music ever written for sound films. 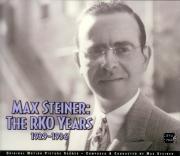 This extraordinary three-disc collection documents the beginnings of Steiner’s film career, when he transformed the art of film scoring while working as a staff composer at RKO Radio Pictures. In an astonishing act of historical retrieval, these three discs preserve music from no fewer than ten different films, beginning with Cimarron (1931) and ending with John Ford’s The Informer (1935)—the film that won Steiner his first Academy Award®. In between is an impressive array of titles illustrating some of Steiner’s wide musical range and adaptability. 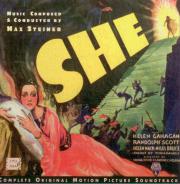 RKO’s 1935 production of She, based on the classic story by H. Rider Haggard, reunited some of the top creative personnel that had crafted King Kong two years earlier to produce another adventure story of fantastic proportions. Steiner’s score for She even establishes a subliminal musical link between the two films: his stark, descending three-note motif for Kong in the earlier classic is here adapted and extended as the theme for the title character Hash-A-Mo-Tep (“She Who Must Be Obeyed”). 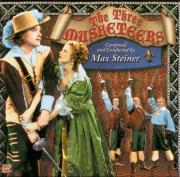 The first major sound-film version of The Three Musketeers, produced by RKO in 1935, suffers a lackluster reputation today because it fails to live up to the standard of the silent Douglas Fairbanks version of 1921. This charge is true enough, but it seems a little unfair since no other version has ever measured up to the Fairbanks original. In any case, the RKO Three Musketeers has distinctions of its own, chief among them a splendid musical score by Max Steiner. 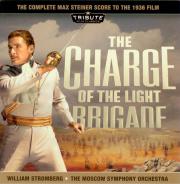 In 1936 Steiner severed his ties with RKO and inaugurated a long, fruitful tenure at Warner Bros. His “audition” for the job, in effect, was this score for the Errol Flynn action-adventure film The Charge of the Light Brigade. Steiner met and even exceeded his usual high standard, contributing a score of epic quality. Although the film was based on an actual historical event during the Crimean War, Warners discarded most of the known facts and substituted a story that was almost entirely fictional. 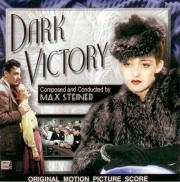 In a way, the inclusion here of the Dark Victory score seems an anomaly in the company of the earlier titles; it suggests Steiner’s work of the 1940s far more than that of the ’30s. And, in fact, Dark Victory did initiate the long series of “women’s pictures” Steiner would score for Warner Bros. during the coming decade. But I can legitimately claim it as a Steiner score of the 1930s, and in any case it’s an outstanding piece of music: tender, richly textured, and unmistakably Steiner.