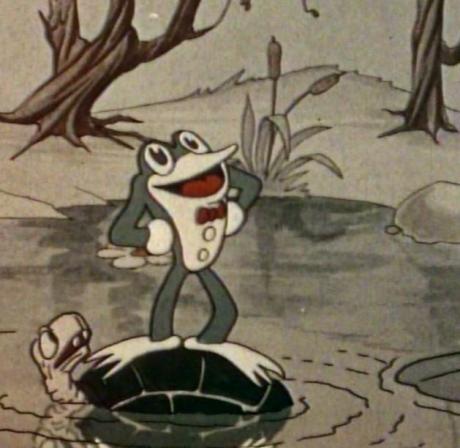 April 2017, the month this post appears, is the month of the TCM Classic Film Festival, that annual orgy of cinematic riches, staged in the center of historic Hollywood. The festival never fails to offer a tremendous selection of films in its lineup, and this year’s program is no exception. (Among many other attractions, the program includes one notable rarity that I’ve written about before in this column!) Along with individual films, the festival will also present a variety of special programs. One particular treat will be The Great Nickelodeon Show, organized by my good friend Russell Merritt, which recreates the experience of a nickelodeon-era program, complete with films and stage acts authentic to the period. Yet another special program will pay tribute to the legendary animator Ub Iwerks by showcasing a selection of his independently produced cartoons. Iwerks’ films will be presented by two luminaries: Leslie Iwerks—the artist’s granddaughter, and an award-winning documentary filmmaker in her own right—and animation historian extraordinaire Jerry Beck.
Ub Iwerks has become more of a household name in recent years—thanks largely to Leslie’s efforts—but he had already been a legend in the animation world ever since the 1920s, when he and Walt Disney first got into the movie business together. He was the unquestioned “star” of the Disney animation department throughout the ’20s, and in 1928 he played a crucial role in designing Mickey Mouse and animating his earliest films. Iwerks left the Disney studio in 1930 to head an animation studio of his own, and introduced a new starring character: Flip the Frog. Disney’s cartoons had created a sensation partly because of their ingenious use of sound; now Iwerks sought to take a step further by producing his cartoons with sound and color. By the spring of 1930 he had finished Flip’s first picture, Fiddlesticks.
Flip the Frog never did achieve widespread success, and three years later Iwerks phased out the series in favor of other projects. Today, however, that very obscurity makes Flip’s cartoons doubly fascinating. The entire series is filled with quirky surprises to delight the animation aficionado. As time went on, Iwerks built up his studio staff, assumed more of an administrative role for himself, and hired other artists to animate his pictures. And, indeed, it’s true that some of those artists would go on to become legendary animators too.
But I confess a personal fondness for the earliest Flip the Frogs, the cartoons produced by a relatively small studio staff, and animated wholly or largely by Iwerks himself. For the viewer who has watched Iwerks’ unique animation style develop throughout the 1920s, culminating in the early Mickey Mouse and Silly Symphony cartoons, it’s fascinating to see that same distinctive style in a new and unfamiliar setting. And Fiddlesticks, the first of the line, is a particular treat. In this first solo effort we can see the two paths—Walt’s and Ub’s, Mickey’s and Flip’s—just beginning to diverge. An artist who has become a familiar friend has just turned a corner, and we’re watching him venture into new and unknown territory. To me, that’s endlessly absorbing.
Doubly so in Fiddlesticks, because we’re seeing Iwerks’ ideas in their purest state. Later, faced with a tepid boxoffice response, Iwerks would bow to pressure from his distributor and others and redesign Flip, several times. As time went on, Flip would become less and less froglike and more of a nondescript creature. None of that in this film; here Flip is all frog—a cartoon frog, of course, complete with buttons and bow tie, designed and animated in Iwerks’ unmistakable style. There’s no real “plot” to speak of; Flip makes his appearance hopping along the lily pads, emerges from his pond, and walks to a clearing where woodland creatures are drinking and dancing to the music of an insect orchestra. Flip himself is clearly the star of the show, and the rest of the reel is devoted to his performance—first dancing, then performing a piano/violin duet with an unnamed mouse. (Some writers have commented that the latter is a Mickey Mouse “lookalike.” Actually, apart from the basic drawing style and the fact that the character wears shorts and gloves, it’s clear that Iwerks took special pains to design a mouse that did not resemble Mickey.)
As for Iwerks’ use of color, it’s pleasant but looks subtle and understated to our eyes. (At about the time this film was made, Walter Lantz was using Technicolor for his animated scenes in The King of Jazz, but here Iwerks used the rival Harriscolor process instead. Subsequent Flip the Frogs would be produced in black and white, but Iwerks would return to color production a few years later.) Story, music, color—in Fiddlesticks all these things are incidental to the pleasure of watching a legendary artist at work. In the larger landscape of film history this cartoon may be easily overlooked, but it’s a souvenir capturing a key moment in animation history—the moment when one of the top talents of the 1920s takes his first steps toward independence. This month, along with a host of other treasures, the TCM festival offers a very special opportunity to revisit that moment.