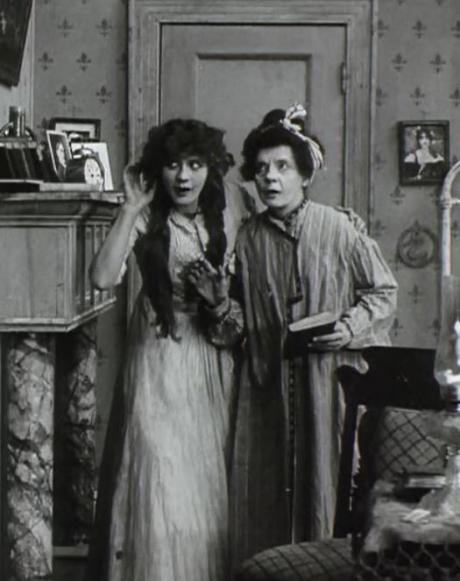 February, the month of Valentine’s Day, is a perfect occasion for movies that celebrate romantic love—and of course there have been many of those over the years. For this column I’m singling out an offbeat example, a one-reel light comedy released by Edison early in 1913. A Serenade by Proxy is a minor effort by any standard, but I find it charming. It also has a measure of historical interest, for at least two reasons.
For one thing, it offers evidence of just how many tried-and-true conventions of romantic comedies were already well established by 1913. The story concerns a romance between a young couple, a romance obstructed by the girl’s father—not because the young man has done anything wrong, but simply because the father doesn’t like him and insists that he “prove himself worthy” of the girl’s hand. This time-honored situation, inherited from the stage and other popular entertainments, was already familiar in 1913 and has been seen in countless other films since then. The girl in this instance is lovely Gertrude McCoy, an actress who was being kept extremely busy at the Edison studio during these years and would continue her prolific screen career afterward at other studios, both in America and in Britain.
Moreover, the romance of the principal couple in this film is paralleled by a secondary romance, played strictly for laughs. This device has also proven useful for the makers of countless romantic comedies—including such sophisticated entries as the Fred Astaire–Ginger Rogers musicals of the 1930s—right down to the present day. In this film there’s nothing sophisticated about it. The lovers are a farmhand (Gertrude’s father is a wealthy farmer) and the family’s cook, a kitchen drudge who is obsessed with romantic fiction and scorns the bumbling, unromantic farmhand. Their relationship is played as broad farce, and as the reel proceeds, the fates of the two couples are intertwined.
As if all that weren’t enough, this slight comedy offers a second point of interest peculiar to the Edison studio. By the early twentieth century Edison had become a large, multifaceted business concern, one that didn’t hesitate to use one of its enterprises to cross-promote another. Not uncommonly, Edison films offered unabashed advertisements for other Edison products. The Stenographer’s Friend (1910) was shown in theaters for the entertainment of audiences, but made no attempt to hide its primary message: the life of the eponymous stenographer, and those of her coworkers, became much easier with the purchase of an Edison wax-cylinder dictating machine.
A Serenade by Proxy takes the same idea a step further. Gertrude, frustrated in her own romance, kindly steps in to help the cook and the farmhand with theirs. Well into the midpoint of the reel, she counsels the lovestruck swain to make a romantic gesture by serenading beneath his lady love’s window. The farmhand likes the idea, but has no singing voice. What to do? Why, let an Edison phonograph do his singing for him! This becomes the “proxy” serenade of the title: the farmhand hides himself and his phonograph behind a tree and sends romantic music wafting up to the cook’s window. Once again the film makes no bones about its commercial motives. None of the human performers gets a true closeup in this film; despite D.W. Griffith’s recent innovations at Biograph, most American films, including this one, were sparing with such devices and settled for moving the camera forward into a medium shot. But we get a tight closeup of the cylinder itself, so that the audience can read the title stamped on the end: “Love Me and the World is Mine,” sung by an unidentified tenor.
The ploy is successful; the cook is swept off her feet, and the story continues with no further mention of the phonograph. Instead we see more romantic complications, leading to a lighthearted happy ending. The film ends, having made its commercial pitch, but also having treated us to a romantic comedy both pleasantly familiar and—in its way—refreshingly unique.