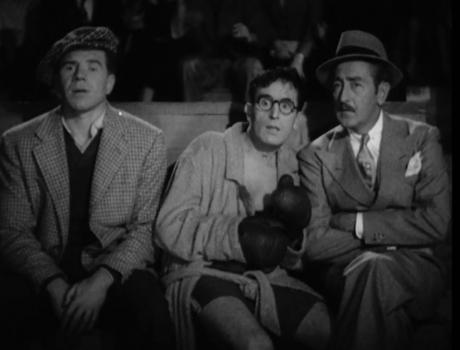 Like many enthusiasts, I was drawn into the world of film history by my discovery of silent comedy. The brilliant sight gags of the great silent comedians, such as Harold Lloyd, established a gold standard for film comedy that has never been surpassed in all the succeeding years. Unfortunately, the sound films produced by the same comedians, after the silent era ended in the late 1920s, are all too often an anticlimactic disappointment. Sound film is, quite simply, an entirely different medium, one that offers strengths of its own, but lacks the properties that made possible some of the glories of the silent era. The sad truth is that most of the top comedians (Laurel and Hardy being an obvious exception) were fish out of water in that new world, and produced sound films that did lasting damage to their reputations.
So what about Harold Lloyd, that master comedian who had shone so brilliantly in Safety Last, Girl Shy, The Kid Brother, and other silent classics? In this writer’s opinion, Lloyd’s sound films are a mixed bag. Some are painfully unfunny, examples of the talking picture at its worst. But as Lloyd gained experience in the new medium, his films showed him increasingly at ease with it. In time he not only adapted to talkies, but began to excel in them—less a fish out of water than a fish in an entirely new pond, and learning to thrive in it.
For me, The Milky Way, produced by Paramount in 1936, was a particularly happy discovery. By the mid-1930s a new breed of comedy had taken root in Hollywood, allowing for the occasional sight gag but relying heavily on rapid-fire wisecracking dialogue. In The Milky Way Harold Lloyd, a past master of wordless physical comedy, is thrust into that fast-talking world—and holds his own. What is the common factor? Answer: director Leo McCarey, a versatile talent who had established himself at the Hal Roach studio in the silent era, but by now was pioneering in the new dialogue-heavy genre of the screwball comedy. With a witty script and the benefit of McCarey’s sparkling, fast-paced direction, Lloyd has the best possible setting in which to prove himself in this kind of comedy.
He appears here as a mild-mannered milkman who has an encounter on the street with the middleweight boxing champion of the world and—quite by accident—knocks him unconscious. The resulting publicity threatens the boxer’s career, so his manager (Adolphe Menjou) hatches a plan: Lloyd himself will be promoted as a fighter. In a series of fixed matches he will consistently “defeat” his challengers and will appear to be a serious contender. Then, when he faces the champion in the ring, the champ can defeat him and restore his own professional standing. Lloyd, needing the money and innocently believing that his fights are legitimate and he really is trouncing all his opponents, goes along with the program. But nothing else goes according to plan, and McCarey conducts the proceedings through a merrily escalating series of comic complications.
Like the character he portrays, Lloyd the performer acquits himself well in a hitherto unaccustomed arena. He doesn’t entirely abandon physical comedy—his nimble footwork will look familiar to anyone who has seen his silent classic The Freshman—but, surrounded by such fast-talking masters of the new style as Menjou and Verree Teasdale, Lloyd blends into the ensemble and demonstrates that he can handle dialogue comedy as well. The story puts his character through an arc: the humble milkman, suddenly plunged into the spotlight, lets his apparent success go to his head and becomes an overconfident braggart, given to a gaudy wardrobe and crowd-pleasing hijinks. Yet he remains a likable character notwithstanding, and when the inevitable comeuppance comes, he reveals an unexpected resilience. (Leo McCarey, too, inserts a brief reference to his own comedy roots: early in the film there’s a quick hat-switching gag that recalls McCarey’s legendary work on the formative comedies of Laurel and Hardy.)
Along with everything else, my fellow Disney enthusiasts will be intrigued to hear that The Milky Way has a tangential Disney connection. At one point in the film, for reasons too complicated to explain here, Lloyd has to transport a small horse across town. He does this by smuggling it into a taxi, trying his best to keep the taxi driver from noticing the animal in the back seat—a task made more difficult by the horse’s frequent whinnies. By 1935, when production started on this film, the Disney studio had launched its cartoon character Donald Duck, a character known for his distinctive voice. Donald’s voice was provided by a performer named Clarence Nash, who had originally been hired by Disney because he could perform a wide range of animal imitations. Among many other things, he could do an excellent horse’s whinny! Moreover, unlike the real horse, he could perform it on cue. For The Milky Way, Disney loaned Nash to Paramount to provide this specialized sound effect.
With so many points of interest going for it, The Milky Way is a delight, highly recommended to any viewer unfamiliar with it. Harold Lloyd will always be remembered primarily for his brilliant legacy of silent comedy, but in this and several other features, he demonstrated that he was perfectly at home in sound films as well. Leo McCarey, too, demonstrated with this film his adept touch with more than one style of comedy. The following year he cemented his reputation for versatility by winning an Academy Award for the screwball classic The Awful Truth—and cemented it still further, the same year, with a heartrending drama of old age: Make Way for Tomorrow.