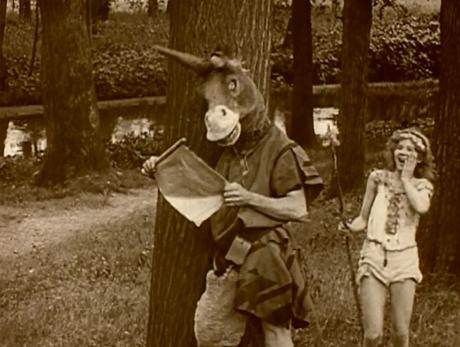 Not long ago, I devoted an installment of this column to a 1935 short promoting Warner Bros.’ concurrent production of A Midsummer Night’s Dream. This time I’m focusing on a production of the play itself, produced more than two decades earlier in 1909. Shakespeare on silent film? To some observers today, the very idea seems counterintuitive. But, in fact, film enthusiasts know that the silent cinema produced many Shakespeare adaptations, relying not on the Bard’s dialogue but on the familiarity of his library of plots. A strong concentration of these films appeared in the years between 1908 and 1911, in response to increasing pressure from censorship groups against the “immoral” influence of motion pictures. Producers responded to that pressure by turning out films of unassailable respectability, and no name could command more cultural respectability than Shakespeare.
There was, in fact, a surge of films with strong dramatic or literary pedigrees during this period. One inherent problem was that feature-length films were not yet the norm at this time, and trying to cram an entire Dickens or Hugo or Shakespeare plot into a single reel was a tall order! But producers generally settled for scenes representing the highlights of the plot. In a popular culture that was, let’s face it, more literate than our own, many viewers were already familiar with the plots of the novels and plays in question, and could recognize and enjoy isolated scenes representing well-known characters and incidents from the classics.
No early film company produced a greater quantity of Shakespeare than Vitagraph, and one of Vitagraph’s most successful productions was A Midsummer Night’s Dream. Filmed in the summer of 1909, the film was deliberately held back so that the company could issue it as a special attraction on Christmas Day of that year. Critics and audiences received it as a significant event. “The picture is full of poetical beauty,” wrote one critic. “The Vitagraph actors and actresses have risen to the occasion.”
For today’s viewer, accustomed to the visual magnificence of the 1935 Warner Bros. version, an effort may be required to appreciate the quiet beauties of this earlier Dream. The story is staged entirely in static medium shots, but it’s important to remember that in the summer of 1909, when this film was produced, Griffith himself was not yet indulging in bravura displays of camera angles and editing technique. The charms of the Vitagraph film lie partly in its settings; the action takes place, not against a quasi-stage set, but in open, natural settings. In 1909 the Vitagraph studio in Brooklyn was conveniently close to picturesque woods and clearings, and director Charles Kent made use of that resource when staging this film. “The natural backgrounds allow actors to group themselves before trees or hide behind them,” latter-day critic Robert Hamilton Ball has observed, “to move through scenery which seems more varied than it is, and to blend in with the sylvan mystery of light and shade. The result is that the film does achieve a kind of pictorial poetry appropriate both to the fairy atmosphere and the lunacy of the lovers.”
Considering how much Shakespeare’s plot hinges on magic, there’s relatively little in the way of special effects in this film. This is noteworthy. It’s true that special effects in the movies were still in a formative state, but Georges Méliès and other filmmakers had pioneered a remarkable variety of cinematic wizardry by 1909. Vitagraph was one of the foremost American exponents of such effects; Princess Nicotine—a celebrated “trick film” of the period, and still impressive today—was produced by Vitagraph around the same time as Midsummer Night’s Dream. Nevertheless, the magic in Dream tends to happen in a straightforward, prosaic manner. Vanishing and reappearing characters do not dissolve in and out of place, but pop in and out by means of simple stop-camera substitutions. When Puck takes flight, it’s by way of traditional stagecraft, suspended from an invisible wire. One interesting cinematic effect does appear briefly as Puck flies back and forth to retrieve the enchanted herb, airborne and superimposed over moving terrain.
Not surprisingly in this concentrated showcase, the tradesmen’s subplot, broad and comic, is a highlight of the film. Bottom the weaver is portrayed by William V. Ranous, a charter member of Vitagraph’s stock company. His is not the traditional interpretation of Bottom; here he’s a wiry, swaggering little firebrand (and, incidentally, also quite unlike Cagney in the later Warners feature). The role of Puck is in the hands of charming little Gladys Hulette (also the star of the aforementioned Princess Nicotine). Lysander is the matinee idol Maurice Costello, one of Vitagraph’s biggest stars—and there are also bit parts for Costello’s two small daughters, Helene and Dolores, both of whom would go on to film careers of their own. Dolores Costello, in particular, would play such a prominent role in films of a later generation that it’s especially appealing to see her here, in A Midsummer Night’s Dream, as a five-year-old fairy.