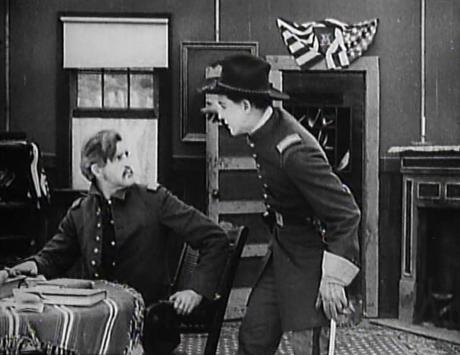 Anyone who loves classic American films is familiar with the name John Ford. Ford’s revered standing in the pantheon is well deserved; he is unquestionably one of our greatest directors, responsible for more than his share of genuine classics. So far-reaching is his reputation that it may obscure the accomplishments of his older brother, Francis Ford. But it’s well to remember that, when John embarked on his directorial career in the mid-1910s, he was actually following in Francis’ footsteps, and in fact cut his teeth as an assistant on some of Francis’ productions. The viewer who knows Francis only from his cameo appearances in John’s later sound films of the 1930s and ’40s—almost invariably cast as a comic drunk—can hardly appreciate the elder brother’s achievements of two decades earlier. The fact is that, during the silent era, Francis Ford enjoyed a substantial career of his own as both a director and an actor. Happily, some examples of his work have survived and demonstrate that talent, and a predilection for Westerns, ran in the Ford family.
One of the best examples is The Invaders, a three-reel Western produced in 1912 by Thomas H. Ince. In 1912 Ince presided over an 18,000-acre tract of land near Santa Monica, a vast spread encompassing mountains, canyons, and other picturesque Western scenery. A group of experienced cowboys lived and worked on the property, and a community of Oglala Sioux, from the Pine Ridge Reservation in South Dakota, lived on the land and were employed to appear in the company’s films. Ince’s Westerns, produced on a grand scale and filled with rugged frontier scenery and authentic detail, were the envy of the industry—a far cry from the simple, rudimentary Westerns of just a few years earlier, many of which had been filmed no farther west than New Jersey.
Produced against this impressive background, The Invaders has been preserved by the Library of Congress with support from the National Film Preservation Foundation, and is now available to us on one of the latter’s marvelous DVD collections. We are indeed fortunate to have access to this film, “one of the first great Westerns,” as Scott Simmon writes in the DVD’s program notes. (Owners of these DVD collections know that much of their great value lies in the notes by Simmon, an exceptional film historian in general, and in particular an authority on the history of the Western.)
The Invaders is a film that uses its large canvas to tell an important story—a story that is fictional in its details, but rooted in achingly authentic history. It opens with the signing of a treaty: the Sioux nation cedes a large part of its territory to the United States, and in return the U.S. government promises to forbid the further settlement of Sioux lands. A scant year later, advance scouts survey the territory for the coming transcontinental railroad, in blatant violation of the treaty. Tensions are inflamed and soon erupt into an all-out war between the Sioux and the Army forces. Commentators who allege that Hollywood Westerns always glossed over the historical truth about the white man’s mistreatment of Native Americans are referred to this and other early Westerns. Without preaching or moralizing, this film lays the blame for the conflagration squarely where it belongs; there’s never any doubt who the “invaders” of the title are.
Due to the lack of screen credits in early cinema, and Thomas Ince’s notorious habit of claiming credit for everything associated with his films, we don’t know whether The Invaders was directed by Ince himself, by Francis Ford, or by the both of them in collaboration. In any case, Ford the actor is well in evidence here as the commandant of the Army post where much of the action takes place. In a film without “stars,” his is the key role, and he carries it with a restrained performance that suggests a range of character traits. As the commandant of the fort he’s unwaveringly loyal to the service and his country—and yet, as a party to the signing of the original treaty, his sympathies are with the Indians. His erect military bearing and quick action during the attack suggest a strong leader—but at the same time he’s fully human, tenderly solicitous toward his daughter (Ethel Grandin) and, when the plot brings the chief’s daughter into the fort, toward her as well. Western fans will note that future cowboy star Art Acord also makes an appearance in this film as a telegraph operator. The Sioux, and the Cheyenne who join forces with them in the attack, are of course played by the authentic Inceville Sioux, except for the chief’s daughter. That role is taken by Anna Little, a regular member of the Ince stock company, who reportedly did have some Native American blood herself.
The film’s three-reel running time is worth mentioning here. In 1912, of course, the film industry was still several years away from adopting the true feature-length film as the standard foundation of a movie program. But as more and more films, including this one, pointed the way with extended running times, that trend was in progress. The Invaders’ three reels, projected at a proper speed (the NFPF presentation is transferred at 18 fps), run for a good forty minutes. Audiences witnessing this protracted drama, with its weighty subject matter, interconnected subplots, and exciting and well-staged action scenes of large-scale warfare, must have experienced something of the effect that feature films would deliver on a regular basis just a few years later. Today, with its sobering story, its plain, rough-hewn style—appropriate to its frontier setting—and the added weight of its historical interest, The Invaders is still a rewarding viewing experience.