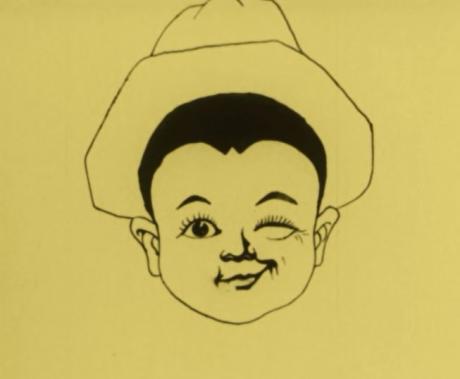 The beginnings of the animated cartoon—those first pioneering efforts, early in the twentieth century, to depict a moving drawing on the screen—have been skimmed over lightly by many historians, but have rarely been explored in depth. They have received a tremendous boost in recent years from Tommy José Stathes, who started collecting films as a hobby and has transformed his pastime into a personal mission to find, preserve, and celebrate the milestones of the early animated film. Thanks to his efforts, important rarities have been saved from oblivion. But Tommy hasn’t stopped there; working with a community of fellow specialists (including my coauthor David Gerstein), he has restored these fragile films to their original image quality, and proceeded to make them available to viewers—via live screenings and, for a wider audience, specially produced DVD and Blu-Ray packages. His most recent video release is a fascinating compendium of the work of pioneer artist Earl Hurd.
In the larger history of animation, Earl Hurd is remembered as the inventor of the cel system: animated figures inked and painted on transparent sheets of celluloid, so that other layers of animation, or static painted backgrounds, can be seen behind them. Hurd patented this system in 1915, and it ultimately became the standard operating procedure for the entire industry throughout the golden age of Hollywood animation. But Hurd was more than a technician. His career in animation encompassed all areas of production and eventually led to a stint in the Disney story department during the 1930s. In the 1910s he was producing and animating a series of cartoons, featuring a boy named Bobby Bumps, for release by the J.R. Bray studio.
The earliest Bobby Bumps shorts are historically fascinating to see today, for more reasons than one. Bobby was cartoon kin to a multitude of mischievous-boy characters in movies and the comics, a pantheon that would continue for generations afterward. To see his earliest films is to be treated to a gallery of prototype gags, made still more engaging by Hurd’s elegantly formal drawing style, described in this disc’s liner notes as resembling “moving Victorian print comics.” The visuals are further enhanced by Hurd’s technical innovations: characters on cels that “read” clearly and distinctly against the background elements. These earliest Bray releases are well represented on the disc, some of them transferred from beautiful 35mm release prints with the original color tints intact.
When Hurd parted company with Bray in 1919, Bobby Bumps began to appear in shorter segments for the Paramount Magazine variety reel. Two of those tidbits are represented here too, one of them with gags reminiscent of Fleischer’s “Out of the Inkwell” cartoons, as Bobby and his dog Fido escape the drawing board into the real world and interact with Hurd himself.
But what may be a revelation for some viewers—as it was for me—is the next phase of Hurd’s career, at Educational Pictures, where he took the “Out of the Inkwell” idea to a delightful personal extreme of his own. We’re told that the Bobby Bumps character was inspired by Hurd’s son, Earl Hurd Jr., and in these films Earl Jr. appears on the screen in live action as director-general of the “Bobby Bumps Film Co.” In a charming conceit, young Earl is seen cranking the camera and “directing” the animated Bobby and Fido as they go through their paces on a “stage,” a vertically suspended white surface, before him.
Fresh Fish (1922) is a good example of these films, combining cel animation with a range of camera tricks to create remarkably elaborate effects that are still impressive today. Earl Jr., directing his players, speaks dialogue that appears on the screen in dialogue balloons, as in a comic strip. His pet cat, likewise filmed in live action, watches in rapt attention as Bobby and Fido, in their animated scene, sit fishing from a boat. In one amazing shot, the real cat leans into the scene, seizes an animated fish, and makes off with it, knocking the animated Bobby off balance and capsizing the little boat. As Bobby and Fido flounder in the water, the real artist’s hand enters the scene and draws a convenient rock, so that the animated boy and dog can clamber to safety.
Thanks to these intricate combination shots, Hurd can indulge in self-reflexive gags of the kind we associate with later directors like Tex Avery and Chuck Jones. Immediately after the fish incident, Bobby climbs off the rock and stands on what is, after all, a large blank expanse of white. “You’re standing on the water!” shouts Earl Jr. Bobby promptly sinks, then struggles to the edge of the “stage” and proceeds to upbraid Earl over the “punk scenery.” He walks off the set, refusing to go on with the scene until Earl provides more suitable water effects!
These are only a few of the delights to be found in these important early cartoons. And thanks to the efforts of a few dedicated individuals like Tommy José Stathes, we have a fresh opportunity to rediscover these treasures for ourselves.