The Making of Walt Disney's Fun and Fancy Free 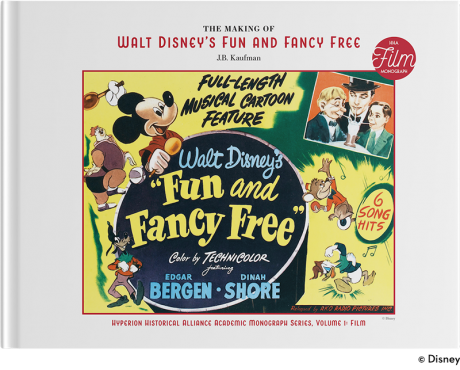 The inaugural entry in a series of Monographs published by the Hyperion Historical Alliance, this volume relates the story behind Fun and Fancy Free (1947), one of Walt Disney’s most delightful and underappreciated postwar features. This was a different kind of “package feature,” combining two featurette-length stories in a single film. Here for the first time is the full, absorbing story of its production, profusely illustrated with over 125 sketches, paintings, animation drawings, and photos, many never previously published. Selected by the Theatre Library Association as a finalist for the Richard Wall Memorial Award.

Purchase direct from the publisher today!

Bongo
In the early 1940s the Disney story department starts development of a new animated feature. The proposed film is the tale of a trained circus bear accidentally turned loose in the wild, based on a story by the distinguished American author Sinclair Lewis. Bongo is shelved during World War II, then revived after the war. Along the way, many different writers and artists add their contributions to it, and new characters and plot ideas are added, then dropped. The finished film retains the bare bones of Lewis’ story, but frames it within an unmistakably Disney mid-1940s production.

Mickey and the Beanstalk
At the same time Bongo is first being developed, a separate unit within the studio is starting production of another feature starring the familiar Disney favorites Mickey Mouse, Donald Duck, and Goofy. This “Mickey feature” is to be based on the traditional story of “Jack and the Beanstalk” but, again, adds some distinctive new twists to the story. Animators begin work in 1941, but then this production, like Bongo, is temporarily suspended during the war. The final 1947 version blends prewar and postwar scenes in a patchwork of classic animation, drawn by some of the top all-time Disney artists.

Fun and Fancy Free
In the constantly evolving creative environment of the Disney studio, ideas are always subject to change. Long before Bongo and Mickey and the Beanstalk are finished, Walt has decided not to release either of them as a separate feature, but to combine both in a single picture. The writers and artists mount the two stories within a third framing story featuring Jiminy Cricket, in his first screen appearance since Pinocchio. This results in a colorfully varied cinematic package, and for good measure Walt adds the talents of two popular live-action performers: Dinah Shore and Edgar Bergen. Backed by an extensive promotional campaign, Fun and Fancy Free is released to theaters in the autumn of 1947.

Appendix A: Production Credits
An exhaustively detailed list of animation, story, and other production credits for the complete film, sequence by sequence, based on the studio’s original production records.

Appendix B: Reviews
A cross-section of reviews, from both the trade press and the popular press, gives a sense of how Fun and Fancy Free was received by critics upon its release in 1947.

Reviews of the book

Few authors are as well-versed in Disney history as J.B. Kaufman. Every book he composes is an event for Disneyphiles and this one is no exception. We are all indebted to the Hyperion Historical Alliance, a society devoted to the study of all things Disney, for making it a reality. Fun and Fancy Free was one of the studio's so-called "package features" of the 1940s, intended to keep the animation pot boiling and not break the bank while everyone geared up for a new, full-length fairy tale in the years following World War II. Kaufman traces this particular film's winding road, as a proposed Mickey Mouse short based on "Jack and the Beanstalk" wound up being paired with a fable called "Bongo" based on a story by literary lion Sinclair Lewis. A plethora of concept artwork, animation drawings, model sheets and the like fill this book and provide eye appeal to match its scholarship. Kaufman even provides extensive credits so we can learn which animators worked on every scene in the feature. This welcome volume is available from Stuart Ng.

Jerry Beck, Cartoon Research:
Well, I don’t know where to begin. But, spoiler alert, here’s the bottom line: Buy this book!
It goes without saying you should buy every book authored (or co-authored) by Disney historian J.B. Kaufman, but this one is special for several reasons. This time JB sets his sights on one of Disney’s “package films” of the 1940s—the first time any such feature (not counting Fantasia) has received such treatment. The Making of Fun and Fancy Free turns out to be more vital than Disney fans and enthusiasts may have thought.
The main reason is to learn the story behind Mickey and the Beanstalk—originally intended to be its own full length feature. Here is that story in lavish detail, explaining what was planned and what was deleted. Of course, the book also details the issues with adapting Sinclair Lewis’ Bongo, also planned to be a feature, and the decision to combine both into a “double feature” of a new type—something Roy Disney was initially wary of doing.
This feature became another opportunity to expand the studio’s effects animation and combination live action/animation technology; and another opportunity to boost the stardom of Mickey, Donald and Goofy—as well as Jiminy Cricket. Kaufman’s book is the first of a series of historical monographs to be published by the Hyperion Historical Alliance, edited by Jim Hollifield. The Alliance has the support of the Disney Archives, and the visual material to support the text here is outstanding. Rare behind the scenes stills, model sheets, storyboards, etc.—a gold mine!
The Making of Walt Disney’s Fun and Fancy Free is a bit of a limited edition—so I urge you to buy it for yourself, right away for Christmas. You won’t regret it.