The Fairest One of All 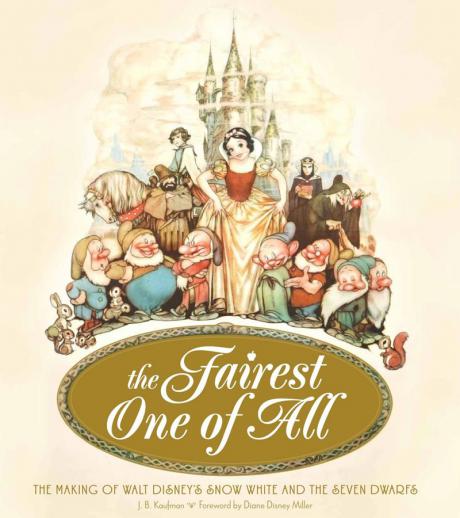 A definitive account of the making of Walt Disney’s timeless masterpiece, Snow White and the Seven Dwarfs, lavishly illustrated and filled with behind-the-scenes detail, and with a foreword by Diane Disney Miller.

Divided into three sections, this volume traces the history of the “Snow White” tale in folklore, theater and film; records the making of the film in intimate detail; and follows with the film’s impact on the Disney studio and the world, immediately after its release and in the decades that followed. Includes complete production credits for the feature and for the later short subjects featuring the Seven Dwarfs.

1. The Birth of the Tale. The origins of the “Snow White” story as an oral tradition in folklore, and its many versions in multiple cultures.

2. “Snow White” on Stage and Screen. Major early stage and film versions of the story, showing how it was successively adapted in each new version. Gives special attention to the 1916 Paramount film, which young Walt Disney saw in Kansas City.

Part II. The Making of Snow White and the Seven Dwarfs

3. A New Challenge. In the mid-1930s, Walt Disney, having already revolutionized the art of animation, tackles his biggest challenge yet: a feature-length animated film.

4. Character Design. Studio artists undertake the difficult assignment of designing characters who are convincing enough to carry the story, but adapted to the technical demands of animation.

6. The Film. A detailed account of the film, scene by scene, describing the story conferences and decisions that led to the finished version of each sequence.

7. Finish the Picture! As the Christmas 1937 deadline approaches, every department in the studio scrambles to finish the film.

8. The Opening. The historic opening night, as Walt and the artists anxiously await the audience’s response—and are rewarded with a joyous, overwhelming reaction.

9. The Ups and Downs of Success. The record-breaking worldwide success of Snow White brings Walt and the studio new rewards—and a few problems.

10. Snow White in Other Lands. The complicated logistics of recording alternate-language soundtracks and distributing Snow White in other countries.

11. The Dwarfs Go to War. Return appearances by the Seven Dwarfs in later short subjects, several of them made for the Allied governments during World War II.

12. The Return of Snow White. The experimental venture of reissuing the film to theaters in 1944 proves a great success, and leads to further reissues of this and other features.

14. Television. The Disney studio’s move into television in the 1950s features frequent glimpses of Snow White, including a reconstruction of the cut “Soup Sequence.”

15. Red as the Rose, Black as Ebony, White as Snow. The care taken with the film’s color during production, and subsequent alterations as the color is repurposed for reissues in later years.

“This book is a treasure equal to that of the movie itself. If you love Snow White, Disney, or animation, this book is a must-have.”

“Thoroughly researched, lavishly illustrated, and a joy to read, J.B. Kaufman’s book is an essential volume for all film historians, cartoon art connoisseurs, or Disney buffs of any age.”

The Fairest One of All was selected as Best Animation Book of the Year by the website Animation A113.

Leonard Maltin, LeonardMaltin.com:
Having read much of this book in manuscript form and having provided a quote for its dust jacket, I can only elaborate on my feelings now that I’ve seen the finished product, an extraordinarily beautiful volume. It’s fair to call this the definitive study of Walt Disney’s landmark animated feature, not only because Kaufman, a meticulous film historian, has dug deeper (and longer) than anyone else into that history, but because he’s made connections few others have pursued: the origins of the fairy tale, the impact that the 1916 silent feature had on Walt Disney (even locating a photo of its star, Marguerite Clark, visiting Walt in the 1940s), the genesis of each sequence in the picture, the merchandising it generated, its continuing success in theatrical reissues, and the reuse of the Dwarfs in a handful of wartime short subjects. Kaufman even breaks down the personnel responsible for every segment of the film, as no one has before. This oversized volume is lavishly produced and is a credit to the Walt Disney Family Foundation, which sponsored and published it.

Didier Ghez, Disney History:
Let me start by stating the obvious: if you are reading this blog today and if there is only one Disney history book you will buy this year it should be this one. The Fairest One of All is a “must have” more than any other books I have discussed in recent years. It is full of never-seen-before visual documents, as expected, but more importantly, it is the most in-depth and the most accurate historical analysis of the making of a Disney movie, ever. This is the closest to perfection that a book about the making of a Disney movie will ever get.

Does this mean that after reading this book you will know absolutely everything about the making of the movie and about the artists who worked on it? Of course not, since this is as impossible in practical terms as the creation of Borges’s imaginary 1:1 scale map of the world.
In other words, when we discuss Disney history, there is always more to research and to learn. This book is for the most serious Disney historians among us a stepping stone. A very tall one.

For some it will serve as inspiration to research the life and career of Dorothy Ann Blank, others will want to understand better the role Natalie Kalmus and Technicolor played when it comes to the history of Disney (this subject alone would deserve an in-depth monograph), while at least one of the readers will someday decide to write the long-awaited biographies of Ham Luske, Norm Ferguson, Freddie Moore, or Art Babbitt (that one is currently in progress thanks to Jack Friedman).

What is certain is that all of us will be indebted to J.B. Kaufman for all the dots he connected, all the documents he gave us access to and all the stories he unearthed through his new book. As always, along with Michael Barrier, John Canemaker, Paul F. Anderson and a few others, he raises the standards of Disney history to levels which are difficult to reach and is preparing the field in a spectacular way for those in the future who will have the discipline and dedication it takes to contribute in a meaningful way to the understanding of Disney history.

Hats off. It is now more difficult than ever to have the patience to wait for the release of J.B.’s upcoming book about Pinocchio. When it comes to Snow White, the wait was worth it. Get that book today.

Fairest One of All